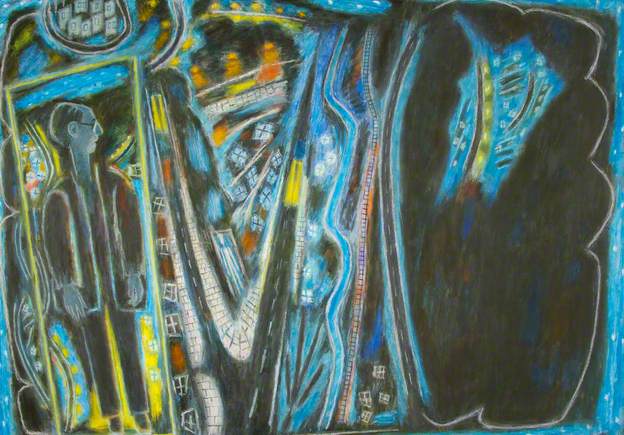 A Painting about Myself in a Landscape Ernest Zobole 1994–1995

From then to now

Written in response to ‘A Painting about Myself in a Landscape’ Ernest Zobole, (1994–1995)
University of South Wales Art Collection Museum

The dim mists of time evolve as ripples. From childhood I recall that trees would bow their branches in respect as the wind whipped the mountain sides. Below, the valley bed beckoned like a guided missile.

It was out of dusk’s dreaming lights that I noticed a man standing. He seemed lost in his own thoughts, unaware. The man stood, his arm extended to some unknown point. The man was gaunt and thin, dressed in a suit.  He turned around, the hairs on the back of my neck stood up as the man vanished as quickly as he arrived.

I married and raised a family. My career and family were my life, but when my wife died I felt as though my whole world had collapsed around me. Slowly our children left.  For the first time in my life I was alone; the world seemed bare, bereft of human companionship. In retirement I felt as if I had been an alarm clock that was slowly being run down, its battery about to expire.

I was drawn back to that childhood haunt; it was like a magnet, all embracing. I had to be there.

My journey ended where it began, the light shimmered like a soft kiss on the mountainside’s surface. My spirits rose.  I could almost smell the camp fire of my childhood. I raised my hand – perhaps I could just reach out, touch and be that carefree boy again.

A forgotten memory brought to mind.

THAT man was me…